Today is a special day. I bet you didn’t know that today is Absolutely Incredible Kid Day! This day celebrates the fantastic kids in our lives! We all know them, right? These amazing kids belong to us, our friends, our family, and our community. They are all over, doing things we couldn’t even imagine doing as adults, let alone as children. We should celebrate these kids every day, but today marks a day when we pay special attention to the wonderful deeds that some of these children have done.

Today, we are looking at two of Lake County’s very own incredible kids. It all started with a little boy. This young boy is amazing in every sense of the word.  He took something devastating and turned it around to be spectacular. I am lucky enough to know him personally, but for all of you that don’t, let’s take a peek into what makes him so absolutely incredible.

Jack woke up one morning in November 2009 with severe back pain. It was so painful that his mother immediately took him to the doctor. After his pediatrician does some blood tests, they sent him to Ann and Robert H. Lurie Children’s Hospital (then Children’s Memorial Hospital) for further tests. What was soon confirmed was every parents’ nightmare.

He was only four years old.

The diagnosis crippled the family in the beginning. Jack needed immediate, intense treatment. His young life took a dramatic turn. Playdates and preschool moved aside for chemo treatments, steroids, and a painful journey that no one could have predicted Jack would have ever had to experience.  The medical bills piled up, the trips to the hospital multiplied, and at times, Jack’s parents, Vickie and John, wondered what the future held for their young son. Adding to their son’s worry was the fact that there was another person in the family that still needed the care and attention of mom and dad.

You see, Jack had a twin sister, Mackenzie, and even though she wasn’t the one with leukemia, she would need every ounce of determination that Jack would need to get through all of this. Do you want to talk about incredible? This little girl would have to grow up extremely fast and would soon become a hero in her own right. Not because she had to endure this terrible disease, but because she had to watch her brother suffer day in and day out and make sense of it. She had to become independent and responsible, upbeat and positive, easy-going and flexible, all at the age of four in a short period of time. Not an easy feat for an adult, let alone a child. There were a few bumps in the road, of course, but this little girl handled it all like a true hero. Like a true “absolutely incredible kid.”

The treatment plan for Jack was grim. Three and a half years of treatment, followed by five years of waiting to be assured the cancer would not come back. The realization of what the family would have to endure for the next eight and a half years was more than anyone could imagine having to handle. Jack often became sick in the first few months of treatment, leading to more hospitalizations, treatment changes, and side effects that no one was prepared to handle.

Still, the family soldiered on.

Each day had to be taken for what it was and looking ahead was not an option. The future held too many questions and the family had to enjoy each day and celebrate the life that Jack had been given today. It was a concept foreign to many of us, but Jack’s family not only got through it, but they also got through it with flying colors.

A wonderful thing happened once the diagnosis set in. Jack no longer accepted that he was a victim of the leukemia diagnosis. He became an advocate for leukemia awareness. At only five years old, he did more work to bring attention to this deadly disease than some giant organizations could do. Jack, his twin sister, and his parents set up a lemonade stand in the summer of 2010, not even a year after his diagnosis, to raise money for the cure. He also collected fun, colorful character band-aids for the hospital after a visit in which the hospital only had brown band-aids to cover his arm after one of his many blood tests. He was not happy with that and wondered how kids could be happy if they only had a brown band-aid on their arm. Jack decided then and there that he would bring enough band-aids into the hospital that a child would never have to have a brown band-aid again! At that lemonade stand in the summer, they not only raised $2000.00  for the cure, but they also collected 6,000 boxes of band-aids to be delivered to the hospital.

That was only the beginning of this family’s quest to bring awareness to Leukemia research and hope to find a cure. They attended fundraisers, accepted a multitude of speaking engagement invitations to talk about their journey, participated in the Eric and Kathy’s Radio-A-Thon, and took part in every event they could attend if it could benefit cancer patients or research. Jack even became The Leukemia and Lymphoma Foundation’s Boy of the year in 2012. His face dotted posters, calendars, and pamphlets, helping make people aware of the disease and raising money while at it. During all of this, Jack was still undergoing treatment, missing a lot of school, holidays, invitations from friends, and life in general for a six-year-old. At his young age, he still realized the importance of what he was doing, and despite missing out on what most of his friends were experiencing, he never stopped smiling and making people laugh. Even though treatment took a toll physically on his body, showing the signs of his disease, Jack never once slowed down and never once became a victim. He was a shining light and inspiration to all around him and remains that way to this day.

This day finally arrived. Five days ago, Jack celebrated one year since he completed treatment. He is a happy, healthy cancer survivor.

That hasn’t stopped him and his family from continuing to work towards finding a cure. This past weekend, they attended a Dance Marathon sponsored by the hospital that raised money and a St. Baldrick’s event that funds childhood cancer research. Jack shaved his head for charity, the fifth time he did this, even though he had lost his hair three times because of his chemo treatments. The family continues to donate band-aids, toys, and their time to Lurie’s Children’s Hospital. They share their story to build awareness and comfort others going through the same thing they have been through.

Jack’s journey is not over yet, though. His mom always remembers that there are still four more years until she can really say her son is cancer-free. They are still taking it day by day, but since he completed treatment last year, those days have become a little bit easier. Jack is a survivor. Jack and his sister have been through a lot. They have approached each day with a smile and a determination to help others. They have grown up into two wonderfully kind and giving nine-year-olds.

Jack is truly an example of an amazing kid. When I asked him why he helps out as much as he does, Jack stated, “I love the reactions when I help out. They are so excited, and it feels good.”

Let’s celebrate these two, and all the other incredible kids in your life today…and every day.

It wouldn’t  hurt to tell them that you think they wonderful too.

Cheryl is an aspiring writer from Mundelein. You can now follow her on her author journey on Amazon.

Get a copy of her first book, Letter’s to my Children, available on Kindle now. 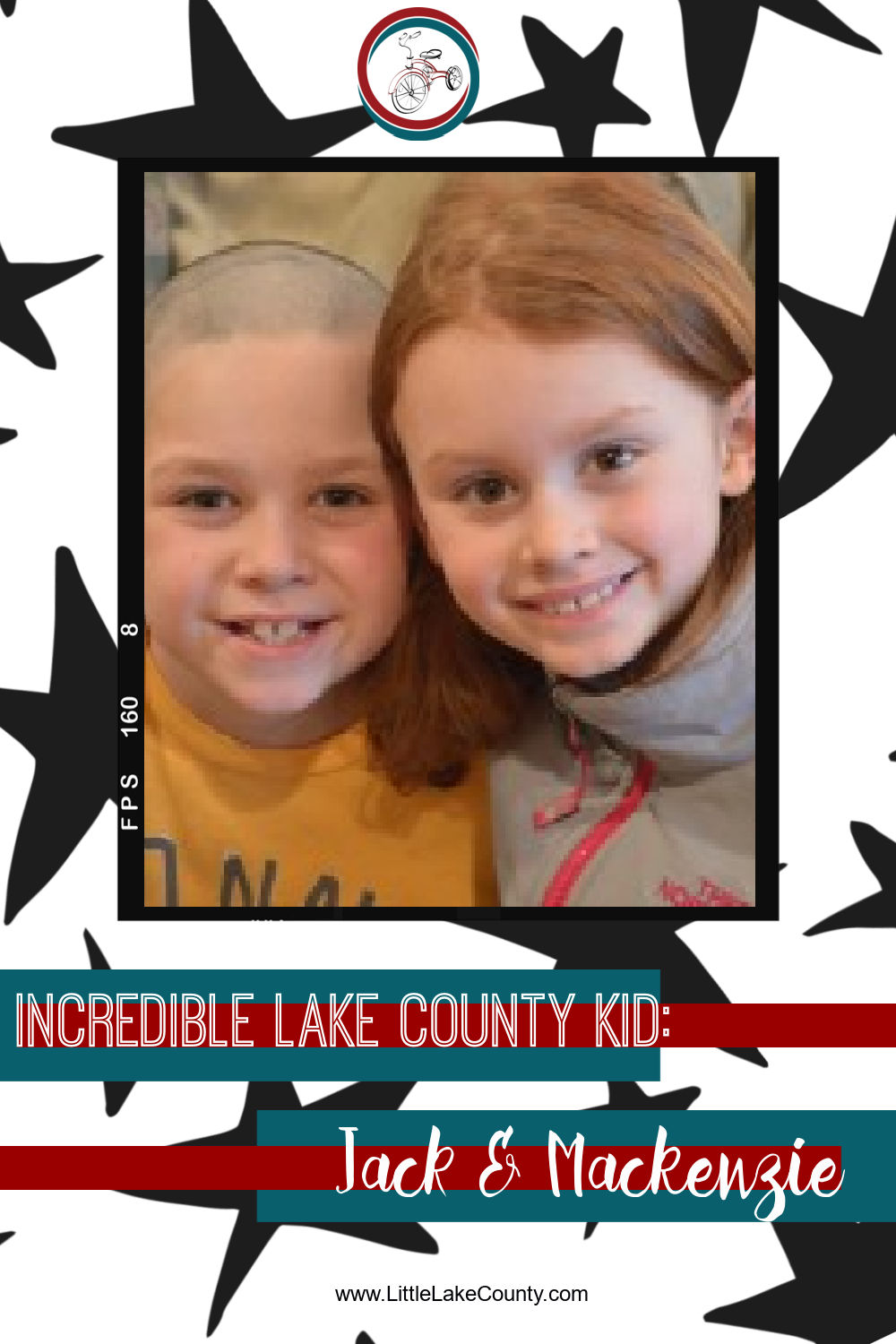 Find FREE (or low-cost) heat relief indoors at these fun, family-friendly locations around Lake County!  The listed locations have hours and availability for Thursday and Friday during the Excessive Heat Warning.  Find other locations by […]

Our family is a pack of road warriors. Let us throw our copious suitcases, duffles of snacks and toys, and odds and ends in the back of the minivan and hit the road! Give us […]