If you haven’t been to the Adler Planetarium since you were on a school field trip back in the day, you probably remember it as a smaller museum with a really cool theater that showed the sky on its ceiling. That’s how my husband and I remembered it. So when my son started begging to go after seeing an ad on PBS, we shrugged it off. We thought he was too young (7- 2nd grade) and that it wouldn’t be much fun for him or his younger sister. We were so wrong; this is not the Adler of our youth. It’s completely different and, in my son’s words, completely awesome.

My family and I were invited* to be Members for the Day and experience all that the Adler Planetarium offers families. We went on a Saturday due to our school and work schedule and were pleasantly surprised that while not empty, it was definitely not packed and overcrowded like some of the other museums tend to be. Since we were just there for the afternoon, we focused our energy on hitting all the family friendly exhibits that we could. Which, of course, meant starting in the cafe for lunch.

The Cafe Galileo’s is located on the upper level and is all open with huge windows offering panoramic views of the skylines and lakes. The kids had a great time watching all the sailboats and picking out the skyscrapers that they recognized  The food is definitely a step above the other fast food offerings of the museum campus with panini sandwiches, salads, and lots of fruit choices.

From lunch, we headed to the first movie experience. We were disappointed that the kids’ show One World One Sky Big Birds Big Adventure was only shown once a day at 10:00 a.m. Our two youngest would have been most interested in that one, and since we didn’t check the schedule ahead of time, we missed it. We asked the desk staff what he would recommend for families and young kids. He let us know that all the shows are considered family-friendly. The difference is how much technical information is given; too much scientific jargon may be harder for them. He recommended Welcome to the Universe and Deep Space Adventure. We did see them both; however, my kids did not like Deep Space adventure at all.

Deep Space Adventure is narrated by a being that you don’t see and assume is some type of alien. It explores the universe and asks are there any other plants or civilizations like ours out there. At the same time, the imagery was amazing and so cool to the adults. The concept was slightly lost on my younger kids, and they were actually a little frightened.

Welcome to the Universe, on the other hand, was perfect for my space-loving boy and even kept his younger sister entertained without scaring anyone. This is basically a tour of our solar system and uses real imagery collected to make you feel like you are right there on the moon and mars. With the recent landing of the Mars Rover, they could work current events into the show and explain how the rover landed and worked. It was a really great show. It’s also worth noting that with young kids, one show is probably enough. My 18-month-old had trouble sitting through them, and I left the second one early to let her run around.

On the map that Adler gives you, they have self-guided tours to help get you through the museum hitting all the best exhibits for what you are looking to do. We, of course, chose the family adventure and got started.

My oldest loves these kinds of tours (he calls them adventures) where he can follow along and check off things as he sees them. There are 7 stops on tour, and we managed to hit 4 of them before the younger girls were done and ready to head home, which is pretty successful in my book!  We spent most of our time in the “Our Solar System’ exhibit and the “Planet Explorers” area.

While the Solar System was very visually appealing and offered as much for the adults as the kids, it did not hold the interest, especially younger ones, as Planet Explorers did. We could have probably spent the entire afternoon in Planet Explorers and skipped everything else. Planet Explorers is like a little kid’s space museum inside the Adler. As soon as we walked in, the kids were greeted and welcomed and told this was their area to explore, hands-on, and run around. My kids took that as a personal challenge and immediately took off (in three different directions, of course! Luckily, there is only one way in or out!)

There was so much to do in this area I couldn’t keep up with the kids! I think the biggest hit with both the older kids was the space ship. They both donned uniforms and got to pretend to take off and then explore the ship, including how an astronaut sleeps standing up and a bathroom. There was also this cool walk in space feature that all of us, adults included, tried (more than once) and thought it was awesome.

At this point in the day, the two girls, especially the youngest one, were starting to get tired, so with much foot-stomping and complaining from the oldest, we decided to head over to the “Shoot for The Moon” exhibit so he could try the lunar jump, which simulates ⅙ gravity. He was on the tiny side for making it really move, but he had a blast.

Overall the kids had a really great time at the Planetarium and we were pleasantly surprised at how much it’s changed, it’s definitely not the Adler of our youth. We will be adding it to our regular rotation of museum trips for sure.

Disclosure: My family and I were invited to spend a day in the city by The Adler and were provided with accommodations, admission to the Museum, dinner, and water taxi tickets. No other compensation was received, and all reviews and opinions are my own. 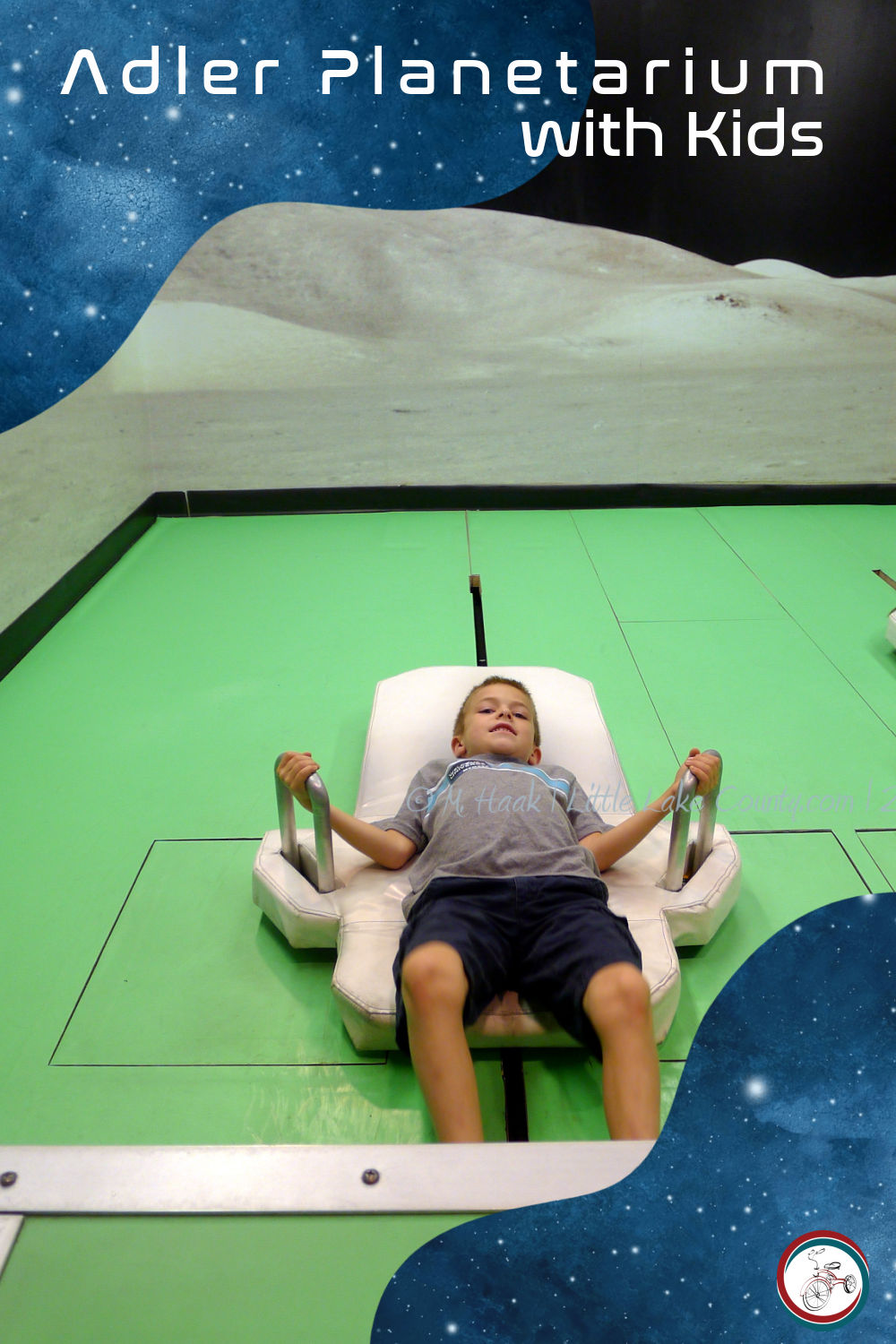 Old World Wisconsin {Worth The Trip}

Little House on the Prairie, Anne of Green Gables, Little Women… these were the stories that captured my imagination as a child.  I would daydream of life in the country, my face stained with blackberry […]

Little Lake County’s writers and editors love visiting local destinations. After all, Little Lake County represents “LOCAL. Family. Fun.” But there comes a time when even we need to drive beyond the borders of our fair […]

Couches, stairs, chairs, high-flying moves and dreams of being American Ninja Warriors fill the minds and free time of my two sons. Luckily for us, Junior Ninja Warriors Chicago is here to save the day […]