As a parent, our over-scheduled lifestyles and never-ending responsibilities can leave us feeling frustrated and sometimes even angry.  Being a parent in today’s day and age can mean gritting your teeth through many white-knuckle moments.

Some of us turn to yoga to find peace, balance, and fitness.  Yet there are some of us who feel, well fitness is fine, but all that Enya and Nag Champa fail to extinguish the fire of the raging beast within.  When life gives you the middle finger, sometimes it helps to throw the middle finger right back…

C’mon, we’re adults here. I’m sure even Mary Poppins had moments when Jane and Michael were just too much to handle, so she popped into the loo to drop a barrage of muffled F-Bombs into a hand towel. And you know what? I’ll bet she felt a whole lot better afterward!

Angie Miller, the “F-Bomb Yogi,” and owner of Blue Sky Yoga in Libertyville understands how contextually-appropriate four-letter words can grant you release. That’s why she started the F-Bomb Yoga series. Now sailors and stressed-out parents alike all across Lake County can rejoice! (Note: You need not be a sailor or a parent to participate, you do need to be 21 years of age or older.)

While dedicating an hour to cursing may appear like giving in to your anger, Angie explains how you are actually expelling that anger so you can let it go. By combining curse words, yoga practice, aggressive music, and WINE, you can release whatever is burdening your soul in a healthy way and in a safe space. A much better and fun alternative than holding in your anger and letting it explode all over your kids, spouse, or the policeman who just gave you a ticket (please don’t do that.)

And it’s FUN! Oh, my Buddha it is SO fun!  Pent-up frustration quickly turns to laughter when you are in a room of forty people shouting “F*#%!” as they throw up a middle finger during the Warrior II pose.  If you’re a novice, not to worry as this workshop accommodates all levels and abilities.

At the session I attended, we were asked to write down whatever frustrations were weighing on us on to a scrap of paper. Later that evening, Angie set fire to all our scraps as a symbolic gesture of release.  We bid farewell to our grievances as the tendrils of smoke curled and twisted before disappearing into the chill night air.  See ya!

Then it’s time for another toast! I may have mentioned that wine was involved, and it flows generously before, during and after your cathartic yoga session. The wine not only helps you to relax and let go of your inhibitions but adds a celebratory element to the evening.

Yoga is followed by a loaded table of party snacks with both healthy and comforting options. I have to say after my first F-Bomb Yoga Session, I am now convinced that all yoga should include a taco dip.  Have some nosh, put your feet up in the Buddha Lounge, browse the gift shop (which features “Zen as F**k” merchandise) or just commiserate with other adults.

If I can’t convince you that swearing is for you, but you would still like to enjoy an alcoholic beverage and/or taco dip with your yoga practice, Angie has a full calendar of classes and fantastic and unique workshops for everyone in your family.  Blue Sky Yoga has hosted Day-Glo yoga, Yoga with Beer, Yoga with Bunnies, Yoga and Art, and all kinds of workshops that put a spin on traditional yoga practice. Classes for children and adults range from yoga, kickboxing, boot camps, Chair Yoga, and even Ninja Warriors classes for kids.  Visit MyBlueSkyYoga.com for full class descriptions and upcoming workshops.

Register for the next session of F-Bomb Yoga at Blue Sky Yoga on MindBody (be sure to select the “events” tab at the top of the page).

Find more reviews of classes and gyms at Fitness in Lake County. 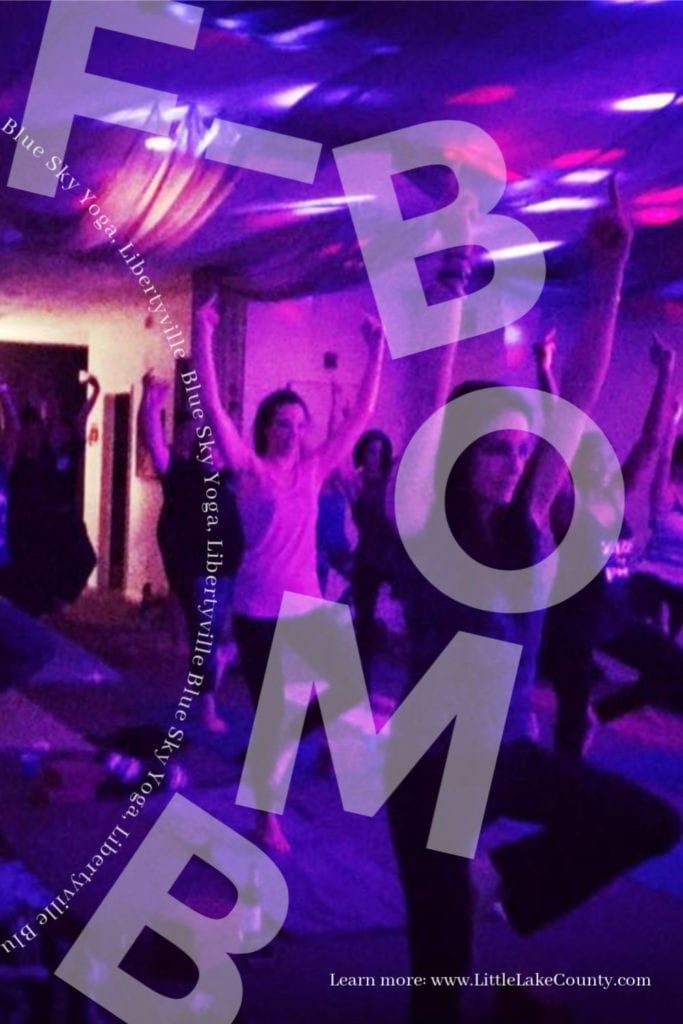 Insiders Guide to Lunch in the Park {Libertyville}

Lunch in the Park Libertyville has been a summer tradition in downtown Cook Park for over 25 years. Picture the song “Saturday in the Park” by Chicago, only it’s Friday, in Libertyville. There are people […]