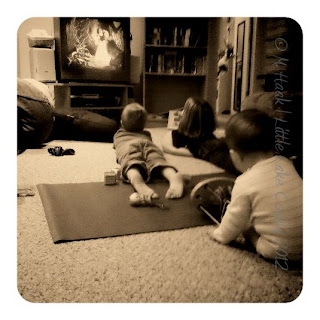 A few months ago we started a family tradition of doing a weekly movie night on Saturday’s with our pizza. We usually alternate between letting our 7year old (boy) and 5year old (girl) choose the movie. For the most part it’s been a revival of old classics that we already had in our collection. It’s been a fun new tradition and quality family time.

Recently we’ve begun letting them pick movies from the library. Sometimes they pick ones we’ve seen or classics we don’t yet own. A few weeks ago we picked out a modern Disney cartoon that my husband and I had seen when it came out. We hadn’t seen it in years but figured it was in the kids section it would be fine. Boy we were so wrong! The kids didn’t even make it half way through before there were tears and crying and we had to turn it off for being “too scary” For our kids I think the family and social issues that were highlighted in the film, something they are blessedly unfamiliar with, was just as scary as the aliens. .

We were so thrilled that the following week this showed up in our mailbox: 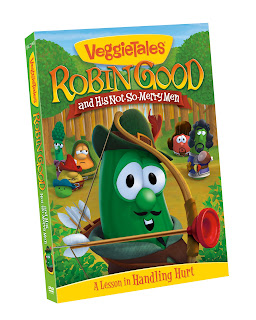 We breathed a sigh of relief knowing that we could show this, without pre-viewing it and know that it will be a fun and entertaining movie for our whole family.  We have been longtime fans of VeggieTales not just for it’s wholesome entertainment and values based message but  because it’s fun and quirky for the whole family. We have joked that VeggieTales never works as a “keep the kids entertained” distraction because we always end up watching it with them!

The story like most of the VeggieTales movies, is a parody on the classic Robin Hood. The Synopsis from BigIdea:

A long time ago, in the faraway town of Bethlingham, roved a band of merry men, led by the fearless Robin Good. Their mission: to help people by fundraising from the rich and giving to the poor!  But when a greedy Prince starts stealing the townspeople’s hams, donations are down and Robin’s friends take off and decide to give robbing from the rich a try. Feeling rejected, Robin thinks things can’t get any worse, until he finds out that the ham-hoarding Prince has also captured his friends. Can Robin overcome his own hurt, rescue his friends and restore the townspeople’s hope?  Find out in this fun Veggie story where kids learn that there’s no hurt too big for God!

Our whole family enjoyed both the full length and the short Lenny & the Lost Birthday which was perfectly timed since the kids had just talked about the leap year/day in school.

A (age 7) Liked the giants.
Loved the King of ham and all the songs about ham and bacon because, yum!
I like all the good guys but not the bad guys. (mom explanation- I think he liked that there was no confusion over who was good and who was bad, he likes things to be black and white)

M (age 5):
I liked all the songs, especially the silly ones, like about Bacon!

So there you have it friends, apparently bacon makes movies fun for my kids! Ha!

In all seriousness we loved this movie, as we have loved all VggieTales movies. The DVD and related products including new VeggieTales band-aids are in stores now, just in time for Easter Baskets!

Do you do a family movie night? Do you pre-view movies? Do you have a go to “safe” movie like VeggieTales you rely on?


Disclosure: I was sent a copy of the movie and a box of Band-Aids from BigIdea Entertainment to facilitate my review. No other compensation and opinions expressed are my own, Some links provided in this story are affiliate links. A small percentage of purchases made through those links are earned and used to cover the expense of running the site. Thank you for clicking!

About Melissa Haak 841 Articles
Melissa is mom to 4. She used to dream of traveling the world, now she dreams of a clean kitchen. She can be found on most social media sites as @PBinmyHair because with this much hair and four kids, you're bound to find something in it.

If the terms NOOBS, Python or Scratch sound unfamiliar to you, or if your child comes to you asking for a raspberry pie, but it has nothing to do with a delicious dessert, you may need […]

Book Review: Nanny and Me by Florence Ann Romano

Supercalifragilisticexpialidocious! Meaning: extraordinarily good; wonderful; a children’s word to express approval. Being the skeptic that I am, believing that Mary Poppins would actually exist outside of Disney seemed unfathomable. But let me be the first to tell you: I. Was. […]

Summer days are upon us and gone are the days of kids working on nightly homework assignments and the rigors of a full, school day schedule. Time is now filled with day camps, playing at […]