MADE is a paid partnership with Little Lake County.

Welcome to MADE in Lake County! MADE introduces you to the people and stories behind local Lake County businesses. This month it’s our pleasure to introduce you to our very own Mompreneur’s Jessica from Animal Quest

I had the pleasure of getting to know more about one of our very own Little Lake County writers Jessica Reedy, co-owner of Animal Quest Exotic Animals. Jessica started Animal Quest with her husband, Steve in 2011. Jessica and Steve have a daughter, Ava. Jessica was born and raised on Vancouver Island Canada and studied Animal Training in California. Jessica moved to Lake County, IL with Steve where they started their business and have decided to raise their family.

What was is like to grow up in Canada?

I grew up on Vancouver Island, which is right off the West Coast – in Victoria. It’s beautiful in every way, but of course, I didn’t really appreciate it until I moved away – isn’t that always the case? I really miss being so close to the ocean. I had been so used to being able to drive just minutes to numerous beaches.

My parents and some of my friends still live there, so it’s fun going back to visit, although it’s never long enough. Too much I want to do, too many people I want to see!

I have one sister, and she and her family are actually in the USA now, too – not too far from us over in Indianapolis. Even though they are only a 4-hour drive away, I wish we saw them more often. Our schedules are completely different, so it’s tough right now.

What brought you to the US, more specifically to the Lake County area?

My husband, Steve, and I had seasonal jobs here (working with exotic animals) the summer after we graduated, so we moved out for that. Coincidentally, Steve was born and raised nearby in Crystal Lake, so his family is here, which is really nice! We looked all over for the right property to buy and ended up in Lake County – we love it here! It’s not too far from my in-laws, and there are so many things to do around here. I feel like we still have so much exploring to do in the area.

What sparked your passion for working with animals?

I have always been a huge animal lover and I had lots of pets growing up. My parents gave in to me and let me have lots of animals of my own including guinea pigs, rabbits, hedgehogs, chinchillas, birds, fish, hamsters, etc. Plus we had dogs my entire life too, but those were the family pets. The others were all mine. The only thing they put their foot down on was a pot-bellied pig. Now that we have one, I am so thankful they didn’t give in on that! I had no idea how much work they were and back then I didn’t know they can live to be 18 years old. I would still have that pig today if I had got one back then! Don’t get me wrong, I love our pig, Norman, but he is incredibly smart and at 150 pounds, he can be quite the handful!

Did you have the typical 9-5 sort of job prior to starting Animal Quest?

I did for the summer before we started Animal Quest but 2 years prior to that I was going to school at a zoo in California and we were there 7 days a week sometimes from 6:30 a.m. until 5:00 p.m. It was a lot of work, almost like a boot camp for Animal Trainers, but it was amazing.

I see you met your husband, Steve at The Exotic Animal Training and Management Program at America’s Teaching Zoo in California and had your first date at Disneyland. I love when we met and first date stories! Please tell!

Yes, we were in the same class, so we were good friends before we started dating. Several of us had passes to Disneyland, and we’d try to go whenever we had a rare day off from the zoo. It turned out we both had a day off a few days before my birthday, but our other friends didn’t, so we ended up going just the 2 of us. We had a great time, and it ended up being our very first date. Disney still holds a special place in our hearts. We went there the day after we got engaged (exactly a year after our first date), and thanks to one of my good friends, we were able to dine at the exclusive Club 33, which was incredible. We also went the day after our wedding, and a week after that, we had our honeymoon in Florida at Disney World.

It is challenging! I think the biggest challenge is never being able to leave work. There is always stuff that needs to be done. Steve and I are used to working together and we work well as a team. At school, we were together almost all day, every day. When we moved here, we worked at the same facility although about half the time we were on different shifts or shifts that only slightly overlapped.

When we started our business it was just the two of us doing all the shows, all the paperwork, all the animal care, everything. We were constantly together but it worked for us thankfully! Now 3 years later we have other people who work for us so it’s actually been several months since we’ve done a show together. We both still do the shows, we make sure that each show gets at least one of us, but it is fun to do the shows together just like old times!

Prior to going to “zoo school”, I got my degree in Business so that has actually come in handy for us for running our own business. We’re still learning as we go through but it’s getting a little easier.

Working with Steve is great because we have the same passion for animals. We are both suckers and have taken in several animals as rescues and bought several others just to get them out of bad situations. Of course, it’s those animals that turn out to be the sweetest and most loving.

One of the most challenging things I find about being a mom and running our own business is time management. I want to be there for my daughter as much as possible but I have constant work to do. I try to do as much as I can before she wakes up in the morning, during nap time, and after she is in bed. Thank goodness for Grandparents and babysitters for the other times!

Does your daughter, Ava, come to work with Mommy and Daddy? Do you find her love of animals the same as yours and Steve’s?

Well, she is just 2 so no she doesn’t come to work with us, but she has a couple of times due to last-minute circumstances out of our control! It was stressful for us but she actually did quite well. You never know with toddlers! She wanted to stand with us at the front and she tried to touch all the animals before the other kids had a chance too. She knows the animals and thinks they are hers.

We were a little worried a while ago when she was just under a year old as she was terrified of our hedgehog and really had no interest in most of the other animals. That has since changed though and she loves everything – including the millipedes! She knows most of the animal’s names and what they are and she loves to go visit all of them. Nothing seems to phase her anymore though. We are always bringing new animals to the house and now she is fearless!

We are thrilled she loves them as much as we do, and whereas we’d be over the moon if she followed in the same career path as us one day, we will support her with whatever career choice she chooses. (But crossing our fingers she does something with animals! haha)

What is the best part of being Ava’s Mama?

I want to say everything but at this lovely stage we are going through right now, I am not too excited about the tantrums and the constant “no”-to everything! Seriously though, it is pretty amazing. I love watching her experience new things and all the stuff she learns every day is unreal. I can’t believe how fast she learns things! She is a lot of fun (usually!) and we have a blast with her!

The biggest thing about you that you would love our readers to know.

We are a pretty normal, down-to-earth family, with a lot of animals – around 85 right now! Our animals are extremely important to us as they are like our kids. This career is really a dream come true for both of us, being lifelong animal lovers, and even though it’s a ton of work it’s totally worth it. Getting be with our animals every day, and taking them to various places to share them with others is the best thing ever.

Be sure to read about the Animal Quest experience.

Meet other local businesses that are MADE in Lake County!

Disclosure: Animal Quest is our featured Business of the Month. This series is part of a paid promotion partnership with Little Lake County.  If you are interested in featuring your locally-owned business in our series, please contact the sales team. 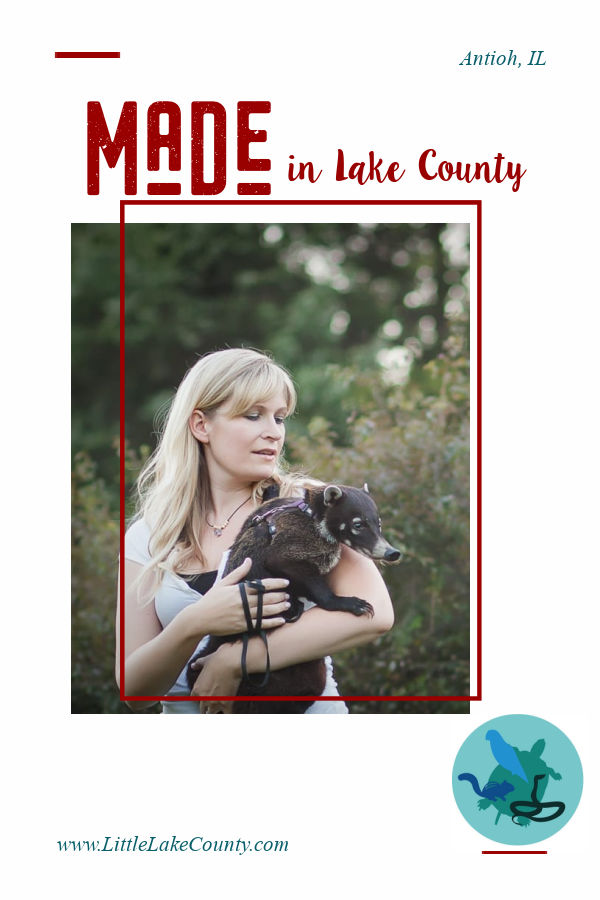 About Stephanie 8 Articles
Stephanie is a wife and mother of 2 girls, Molly (02/11) and Lily (01/12). Stephanie grew up in the northwest suburbs and moved to Chicago in Wrigleyville area where she resided for a decade before moving to Lake County and becoming a homeowner. Stephanie is in love with the simple moments with her little family and enjoys blowing off steam from the daily grind (or her daughters extra toddler tantrum days) with running, wine, supportive family,and amazing friends.

Welcome to MADE in Lake County! MADE introduces you to the people and stories behind local Lake County businesses. Today it is our pleasure to take you inside Corner Health Foods in Mundelein. Owned by […]

Welcome to Locally Grown! Locally grown introduces you to the people and stories behind local Lake County businesses. We’ve had the pleasure of helping you get to know Mila Aron of Milamemories Photography this month. […]

MADE in Lake County: Dance Academy of Libertyville

Dance Academy of Libertyville is MADE in Lake County. They provide ballet classes starting at age 2.5 as well as tap, jazz, modern and more! […]