Now through May 4, you can introduce your children to the old school cartoon we grew up with eating cereal in front of the TV on Saturday mornings! The Marriott Theater for Young Audiences presents Schoolhouse Rock Live!

Schoolhouse Rock was an Emmy-winning cartoon that ran most of its course on ABC during the 1970s. Schoolhouse Rock tells the tale of Tom. Tom, a school teacher searching for a creative and unique way to teach his students their studies through fun and music. Through catchy songs such as “Three Is A Magic Number,” “I’m Just a Bill,” “Conjunction Junction,” and “Interplanet Janet,” kids are singing along to the tunes while learning!

School House Rock is the brainchild of a parent, David McCall, who worked in advertising and noticed his child could remember tons of popular music songs but struggled to learn multiplication tables. He figured out that kids could learn in a fun manner if they could sing what was taught in school. The Marriott Theatre’s production of Schoolhouse Rock Live! is directed by George Keating, one of the original creators of the show, with Lead Artistic Director Aaron Thielen, and Artistic Director Andy Hite. The talented cast of Schoolhouse Rock Live! Includes Brian Bohr as “Tom”, Jackson Evans as “Joe”, Zachary Gray as “George”,  Holly Stauder as “Dina”, Rose Le Tran as “Shulie”, and Brandi Wooten as “Dori”.

I would recommend the show for school-age children. The cast interacts well with the audience and brings energy to the stage! I noticed kids that understood what an adverb was or knew their multiplication tables were more into the songs, caught on to the songs faster, and were not as antsy as younger kids. While I enjoyed the nostalgia of the show my 3-year-old got antsy due to not knowing really what most of the songs referred to. There also is no such thing as a bad seat in the house. The theater is small and intimate, set in the round making every seat a great seat. No matter where you sit in the theater it is easy to feel part of the show.

Schoolhouse Rock Live! plays most Thursdays through Sundays at 10 AM. Visit MarriottTheatre.com or call 847.634.0200 for the exact schedule, as show times and dates may vary. This is a special one-hour presentation recommended for ages 5 and up. 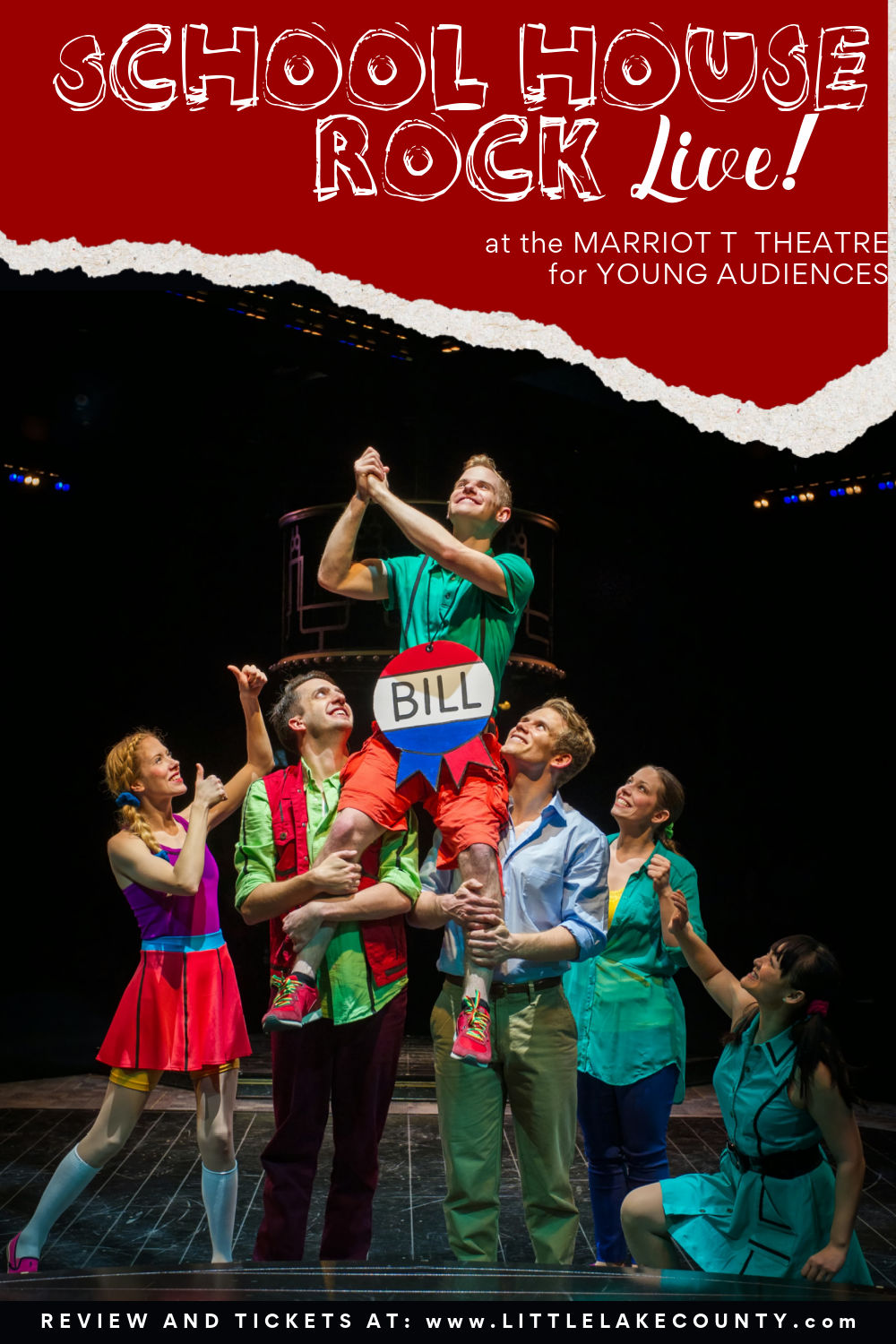 About Stephanie 8 Articles
Stephanie is a wife and mother of 2 girls, Molly (02/11) and Lily (01/12). Stephanie grew up in the northwest suburbs and moved to Chicago in Wrigleyville area where she resided for a decade before moving to Lake County and becoming a homeowner. Stephanie is in love with the simple moments with her little family and enjoys blowing off steam from the daily grind (or her daughters extra toddler tantrum days) with running, wine, supportive family,and amazing friends.

Not Your Typical Princess: Sleeping Beauty at The Marriott Theatre in Lincolnshire

Before any of you Disney naysayers start rolling your eyes, let me tell you… this ain’t no Disney Princess. The Marriott Theatre in Lincolnshire is now featuring Sleeping Beauty through August 18th. Trust me, there’s plenty for girls, boys, and jaded adults alike to enjoy. […]

The Marriott Theatre for Young Audiences brings one of Hans Christian Andersen’s most treasured stories to life this spring in the musical The Emperor’s New Clothes. While the weather outside may still be unpredictable, we know […]

Modern musicals have been adapted from everything such as single songs to a cartoon about a sponge. In my opinion, one of the best is Pinkalicious the Musical based on the books by Victoria Kahn […]