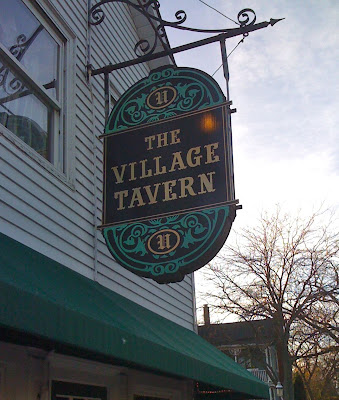 A night out for dinner, drinks, and dancing looked a lot different several years ago, but that doesn’t mean those days are gone. Now it just means we have an earlier bedtime and there is no puking involved (at least one would hope.)

If you’ve got a craving for an adult beverage and grown-up company, there’s no need to leave the kids at home on a Friday night. Head on over to The Village Tavern {135 Old McHenry Road, Long Grove}. We recently had a wild and raucous time there with two other families (six kids, ages six and under) and no one had to call the police.
The Village Tavern in historic downtown Long Grove is a family-owned restaurant and watering hole featuring live entertainment six nights a week. On Friday nights they host a sing-along with plenty of fun, family favorites and room for your tykes to join in on stage. With no prompting whatsoever, my three-year old hopped off his booster seat, still wearing a bib, and jumped up on stage to dance. I’m a little worried that he learned the lyrics to “In Heaven There is No Beer.” Hopefully the moms in my playgroup have a sense of humor. 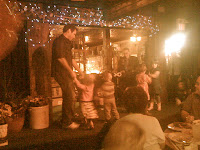 The keyboardist and singer was a literal Pied Piper, but it didn’t hurt that he was handing out lollipops. Soon enough the stage was packed with happy, dancing children and even some parents getting in on the hokey pokey action. My normally shy 14-month old decided that she too wanted to shake it all about. 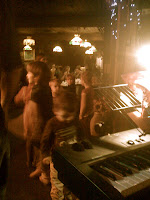 To add to the kid-friendly atmosphere, a strolling balloon artist made his way between tables creating some of the most elaborate balloon animals I have seen. 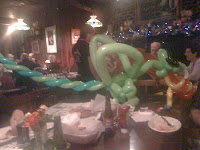 Being one of the larger tables with kids, we were lucky to snag him early in the evening. Depending on how busy they are, and how outlandish the balloon requests, it may take him a while to reach your table, but it’s worth the wait. Don’t forget some cash to tip him and the musician. They will be the reason you’re able to finish your drink and occasionally a sentence. That is, in between shaking a tail feather on stage with your kids.

If you’re looking for a quiet, romantic evening with gourmet fare, I would look elsewhere. If you get uptight about your kids sitting still and being quiet in public, well good luck! At the end of the night, we had kids under the table, kids on stage, and one kid banging me in the head with a balloon. I then turned to my dear friend who had suggested we dine at The Village Tavern and said to her, “This is utter chaos….AND I LOVE IT!”
In terms of food, there’s really not that much to mention. It’s standard pub fare – burgers, wings, chili, etc., with a few heartier entrees thrown in the mix. My own burger came rare when I asked for medium, topped with a sad little leaf of iceberg lettuce, and was lost adrift a sea of white hamburger bun. To be fair, this didn’t stop me from eating the entire thing so I really can’t complain. We came to have a good time and that’s exactly what we did. We will be back for seconds!
The Village Tavern
135 Old McHenry Road, Long Grove |(847) 634-3117
[email protected] | The Village Tavern on Facebook

About Loralie 266 Articles
When Loralie isn’t out exploring with her two pint-sized adventurers you’ll often find her in front of her computer plotting to take over the world (or at least Lake County.) She appreciates good friends, good food, expensive shoes and parents who make two lanes in the drop-off/pick-up line at school. Her spirit animal is The Hobbit. She invites you to join her on her quest for unique distractions, diversions and deliciousness in this county we call home. She is the Features Editor and Marketing Director at Little Lake County.

April 14, 2015 Loralie 0
We’ve challenged your children to become global citizens without leaving Lake County by grabbing a Passport to Flavor and taking our Global Dine Around Challenge for Kids. If you missed the intro head over to the Passport […]

June 10, 2014 Loralie 2
If you have a special event to celebrate (AHEM… Father’s Day…Hellooo?!!,) an appreciation for camp, retro, and all things Polynesian, then you must make the trip to Des Plaines for the Friday and Saturday night shows at The Tiki Terrace. […]

May 10, 2016 Holly Garvey 1
People are passionate about their food. Some foods are polarizing, like the never-ending debate over the best kind of pizza: deep dish or East Coast (by the way, the answer is deep dish). Some foods […]