Hot time, summer in the city! Lucky for us, the latest heatwave hit just in time for an awesome new show at The Marriott Theatre for Young Audiences. Junie B. Jones, The Musical, is a wonderfully entertaining way to beat the heat!

My sister-in-law, my seven-year-old daughter, and my soon-to-be six-year-old niece joined me for the premiere of the newest show on a 90+ degree Saturday morning, and what fun we had experiencing the zany antics of Junie B. Jones and her friends. As always, the staff was friendly and helpful and the theater was clean and cool. There are literally no bad seats in the house, as Marriott Lincolnshire is a theater-in-the-round. Every seat feels like a VIP seat, and the kids love to watch the actors use the aisles as they go between the stage and the backstage area.

If you’re not familiar with Junie B., picture this: It’s Junie B.’s first day of first grade, and a lot of things have changed for her: Junie’s friend, Lucille, doesn’t want to be her best pal anymore and, on the bus, Junie B. makes friends with Herb, the new kid at school. Also, Junie has trouble reading the blackboard and her teacher, Mr. Scary, thinks she may need glasses. Throw in a friendly cafeteria lady, a kickball tournament and a “Top-Secret Personal Beeswax Journal,” and first grade has never been more exciting.

My daughter is entering the second grade and is familiar with Junie B. but hasn’t read a whole book yet. My niece is entering first grade, so it was especially exciting for her, as the one-hour show is a combination of four of Barbara Park’s best-selling Junie B. books and Junie B. is actually in first grade! The women who wrote the musical—Marcy Heisler and Zina Goldrich, as well as the top-notch actors—did such an amazing job and had us laughing and grooving in our seats the whole hour.

If you’ve seen children’s shows at Marriott before, you might recognize a few of the actors. They are all so talented and seamlessly play multiple roles in this performance as well. And while Junie B. can come off a little bratty in some of the books, her character in the musical is endearing, funny and smart with just the right amount of sass!

The standout favorite part of the show is the high-energy musical numbers. They were just SO. FUN! Motown, doo-wop, and even a gospel-inspired song about Junie B. needing glasses made us laugh and dance in our seats. The kids were giggling and smiling for the whole show. It is truly a show for all ages!

After the show is done, be sure to stay 15 minutes longer for the ever-anticipated Q&As. Audience members have an opportunity to ask the actors questions—from how long they’ve been acting to how they change their clothes so fast when they go between characters. As an added bonus for us, one of the co-writers of the show, Marcy Heisler, was in the audience! She grew up in Deerfield and was so excited to see her work in-the-round. After the Q&A session, we were also able to wait in a quick-moving line to meet the wonderful actors who played Junie B., Herbert and Lucille. They were just as vibrant in real life and fun as they were on stage!

Growing up in Lake County, I’ve been lucky enough to see many shows at Marriott Theatre. As a parent, I’m so impressed with their children’s programming and happy to share new theatre memories with my daughters. Hopefully, you and your family can get out to see this spunky show before it’s gone and make some memories, too!

Disclosure: The writer received tickets to the media preview in order to facilitate this review. All thoughts and opinions are the writer’s own and no further compensation was received. 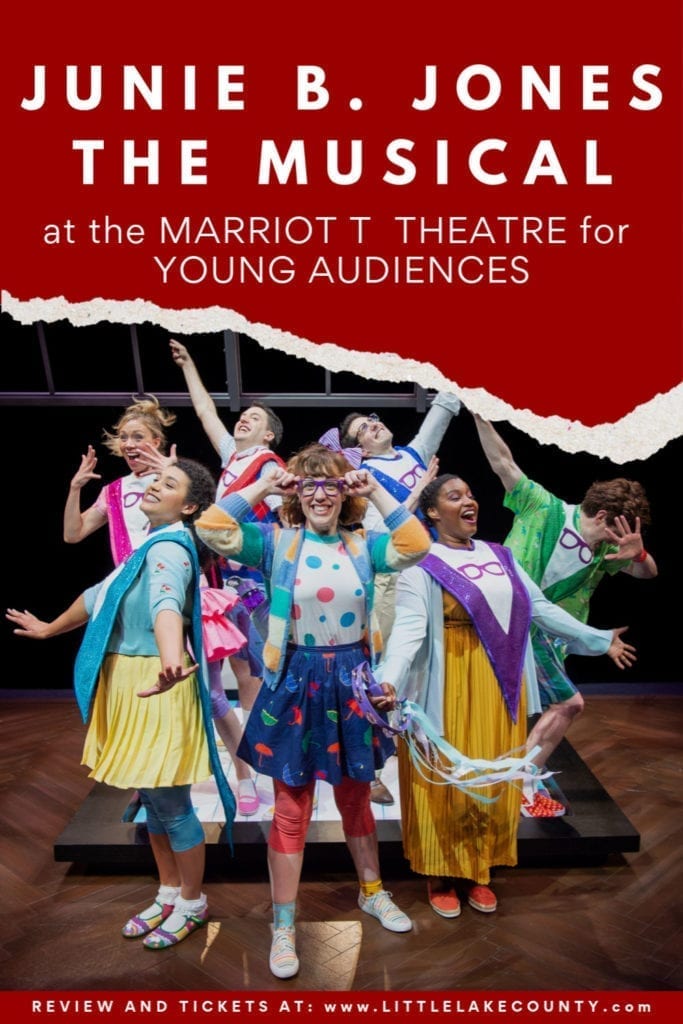 Our guide to Spring 2017 Children’s Theatre in and around Lake County is presented by the Gorton Community Center in Lake Forest.  See the pages of your child’s favorite Eric Carle stories come to life […]

Great Places to Take a Field Trip in Lake County

Looking for local field trips? I have the list for you. Whether it’s a learning opportunity for your preschooler; extended learning for your homeschooler; or you’re a teacher new to the area not knowing where […]

Modern musicals have been adapted from everything such as single songs to a cartoon about a sponge. In my opinion, one of the best is Pinkalicious the Musical based on the books by Victoria Kahn […]